I will support all measures to federally legalize marijuana as a nurse. Also, for residents of the 13th district with a boat on federal regulated waters such as myself (Detroit River) and for all Michigan citizens that boat on the Great Lakes.

I do not want marijuana a federal issue.

I want it a state issue. 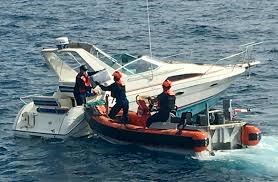 The 13th district is on the Detroit river. Even though Michigan and Canada have legalized marijuana, the Detroit River and Great Lakes still remains illegal under federal law.Also Michigan's National Parks.

The Coast Guard can board your boat even though it is in Canadian waters for suspicion or to inspection.    Sitting in the marina partying is in federal waters.

If any amount of controlled substance is found on your boat you will be issued a federal ticket to appear in federal district court. The 1st time offense is one year in prison and/or $1000 minimum fine. If your passengers try and hide their controlled substances and it's found it is considered the boat owner's possession.If there is more than simple possession collectively- now it's a felony possession.

Example: if your passenger is smoking a joint and  the Coast Guard asked to board and they ditch it in the cup holder..because it's not in their hand it's considered the boat owner's possession because that's where the boat owner has stored it.

As a nurse I have worked with cancer patients that smoked marijuana to ease the nausea from chemo. This is a wonderful drug in that it:

When my father had pancreatic cancer I could not get his primary doctor nor his and oncologist to sign for medical marijuana even though it was legal in Michigan because it was federally illegal. I watched my father suffer needlessly. I want to make sure it NEVER happens to anybody else.

It is also good for glaucoma as it lowers intraocular pressure , certain forms of epilepsy, anxiety, MS and I found 3+ current NIH studies for anti-tumor properties. (Scroll down to conclusions)

The influence of biomechanical properties and cannabinoids on tumor invasion

..and THIS one shows that the cannabinoids can inhibit and kill cancer cells in pancreatic cancer, which my father had. Not only did he suffer from the chemo- he could have been around longer.

When you click on this article- look at the column on the right and see all of the other studies.

Potential Use of Cannabinoids for the Treatment of Pancreatic Cancer

The reason I voted for recreational marijuana was to stop kids from buying on the street and funding the cartels or gangs. Also, so medical marijuana patients didn't have to go through the hassle of finding a doctor to certify them and pay for the certification.The state of Michigan was requiring them to renew annually at an average cost of $100 not covered by insurance.

I had a brother-in-law die from a laced joint bought on the street. He was not a kid. He was a master's prepared University of Michigan graduate.

I want what people are buying to be grown here and educated on what is being bought -which is what we are starting to do.

It needs to be federally legalized to stop these scenarios and its good for the 13th district. I don't want citizens nor the Coast Guard put in these scenarios when cannabis is legal in Michigan and Canada.